You are here: Home / Communication / Becoming a Better Negotiator (Part 2)

Negotiations are an essential component of doing business with other parties, and when your negotiating skills are well-developed, your chances of realizing mutually satisfactory deals are rather high. Although no two negotiation processes are alike, and the only certain way to become a skilled negotiator is through real life experience, the following general tips should help you to further develop your negotiating skills.

Negotiating, like nearly every other act in life, tends to reward those parties who are brave enough to take the initiative. In many negotiation situations, both parties are hesitant to act first for fear of saying or doing the wrong thing, and, because of this, many negotiators are prone to such requests as “Make me an offer.” Although this is extremely tempting, as it gives you insight into what kind of figures the other party is considering, giving them the opportunity to begin the concrete negotiations is actually considered by many experts to be a large and potentially fatal mistake. Several studies have been conducted on the matter, and the results are clear: The final outcome of the discussion is significantly affected by which party makes the first offer, and the party who takes the initiative enjoys the advantage. Research suggests that these results exist because the first figure suggested acts as the foundation for all subsequent conversation. All other offers are based around that initial anchor. 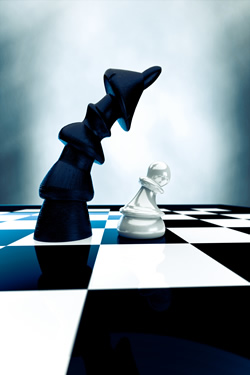 This may seem obvious, but, too often, negotiators waste time and resources stuck in seemingly never-ending negotiations, only to watch as their efforts fail to come to fruition. If negotiation processes seem to be failing, or if you’ve realized there is no potential for the deal to meet your terms, there is no shame in simply walking away. If you fail to do so, you risk both wasting resources working on a hopeless deal or, worse yet, closing a unsatisfactory deal by making too many concessions. Another benefit of this tactic is that by reminding the other party of your ability to walk away, you could actually help to move the process along, perhaps on even on better terms. Remember that if they have agreed to enter into negotiations with you, then the other party feels as if they have something to gain from your business. This means they would be hesitant to allow you to walk away from negotiations without having reached an agreement.

Patience is essential to any negotiation, yet negotiations can be trying and exhausting to even the most patient of people. One mistake to avoid at all costs is to show the other party that you are anxious to reach an agreement. If you show them that you are impatient to close the deal, then you have made an accidental concession that could give them the advantage. If the other party knows you are willing to make further concessions just to relieve the fatigue you are experiencing from the negotiating processes, then they will certainly take advantage of this vulnerability. By saying things like, “Finally, we’re getting close,” you clue the other party into the fact that you are anxious to reach an agreement- any agreement- and that they have your unspoken permission to take advantage of your impatience.

Negotiation processes are nearly unavoidable in the business world, but they don’t have to be the intimidating processes that many people believe them to be. By being brave enough to initiate the discussion, exercising your right to walk away when necessary, and remaining as patient and composed as possible, you help to ensure your success in securing a win-win deal.

For more tips on how to improve your negotiation skills, visit Part 1 of “Becoming a Better Negotiator.”