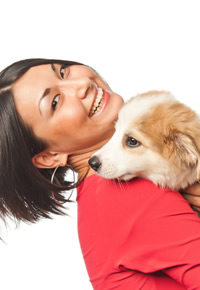 When Ronnie Fliss’s job of over thirty years was suddenly eliminated, this former corporate businesswoman found herself at a loss for her next move. She was an IT specialist, and as a middle-aged woman, she knew that the chances of her landing one of the few IT jobs that hadn’t been outsourced were slim at best. Although her husband’s job allowed their family to be financially secure even with her being unemployed, Ronnie still felt hopeless. It was only with the help of an observant friend that she managed to find the inspiration for her new career.

When Ronnie’s friend paid her a visit, he remarked casually that she should consider making gourmet dog treats. She loved her basset hound Murray, he observed, and she also loved to bake. So why not combine her two passions into a potentially lucrative career? Ronnie decided to do just that, although her goals were modest at first. She began by researching and eventually tweaking a few recipes she found on the internet, and she then delivered the treats to local pet shops with Murray by her side. Thus began Fat Murray’s Doggy Treats.

Ronnie began her business carefully. She kept at it for six months simply because she enjoyed the stress relief and sense of gratification it gave her, and before she committed herself completely to the enterprise, she researched the market extensively. She spent nearly six months carefully evaluating the dog food industry to determine whether or not there was room for Fat Murray’s Doggy Treats, and her findings – that it was nearly a $7 billion dollar industry fueled by a vast and devoted customer base – encouraged her to dive in head first. Ronnie’s decision to bake only sugar-free and healthy dog treats also enabled her to tap into the growing organic and natural health market.

Ronnie’s business has certainly not been without its ups and downs. She’s experienced recipe mishaps on a large scale and must constantly cope with the sudden shift between hectic periods and slow times. At one point, Ronnie even lost one of her biggest customers. But the fulfillment Ronnie gets from baking Fat Murray’s Doggy Treats makes all the trying moments worth it.

What can new entrepreneurs learn from Ronnie’s story? First, Ronnie’s experiences with Fat Murray’s highlight the need for new entrepreneurs to do something that inspires them in some way. For Ronnie, Fat Murray’s Doggy Treats provided her with an opportunity to escape the stress of her old career, and it satisfied her love of both baking and pets. Ronnie’s story also emphasizes the importance of researching your prospective clients and market before completely committing to your new career. While it’s important for you to follow your entrepreneurial dreams, it’s important to recognize that there’s little point in doing so if your venture is destined for failure.