You are here: Home / Employees / Which Absenteeism Policy is Right for Your Company?

There is no business owner who enjoys seeing chronic absenteeism patterning among his employees. Excessive employee absences are not only an inconvenience, but can also cost your company money in terms of lost labor or the need to hire a temp to cover the now vacant shift. While employee absences can never be completely eliminated, choosing the right absenteeism policy and knowing how to enforce it can help to reduce the impact of unexpected absences on your business. There are two main types of absenteeism policies: no fault policies and excuse based policies.

The excuse based absenteeism policy is exactly what its name implies: It requires employees to provide a valid excuse for their absence. Depending on the size of the business and the level of trust among workers, this proof could be in the form of a doctor’s note, or the employee’s word alone might suffice. Some employers require an excuse for every incident of absence, while others only require documentation after a specific threshold has been reached. If the excuse appears to be genuine, then the employee is not disciplined in any manner, but if the excuse is invalid or if no excuse is ever presented, then disciplinary action is initiated against the employee.

Excuse based absenteeism policies sometimes result in lower incidences of absenteeism due to the generally difficult nature of procuring a legitimate excuse. Some employees simply do not feel that taking an unneeded sick day is worth the trouble if they must obtain a doctor’s note or some other proof of their absence’s validity. However, discouraging absences in an excuse based system is sometimes difficult due to the fact that some companies do not establish a limit on the number of absences each employee is permitted per year. Therefore, if an employee has no qualms about faking illness to secure an extra day home from work, they could accumulate a large number of incidences.

Usually, however, a gentle reminder is all that is needed to reverse an employee’s tendency to miss work excessively, whether for legitimate or illegitimate reasons. Be sure to be sensitive during the talk, however, as it is possible that their absences have all been legitimate, and you do not want to offend them. Simply use this as an an opportunity to express your concern for their health and to inquire after their general well being. Remember, your overall goal is not to admonish the employee for their excessive absenteeism, but rather, you simply want to sensitize them to the fact that you do notice how much work they have been missing. 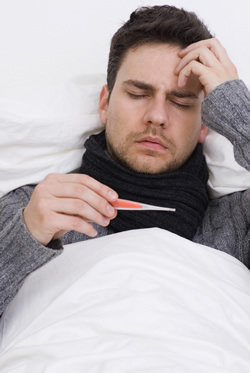 The no fault system of documenting absences is usually implemented by larger companies who do not want to invest the time or resources into an excuse based system. The policy simply counts the number of absences that occur during a regular or rolling calendar year without requiring employees to provide an excuse. The no fault policy acknowledges that employee absences are inevitable to a certain degree, but, after that point, disciplinary action is usually taken. An example policy would be as follows:

Obviously, a system would be in place to grant exceptions in the rare case that they were warranted, but, for the most part, this type of policy applies to all employees universally. This type of absenteeism system benefits the employer by freeing them of the responsibility to research every incident, but, like the excuse based system, it does have its drawbacks. For example, if employees know that they are allowed two days of absence with absolutely no consequences, they might likely take advantage of the system by calling off work unnecessarily simply because they can.

If an employee tends miss most of their days near the end of the year (right before their number of absences is reset to zero), then they could be taking advantage of the system. Again, as with an excuse based system, a simple reminder is usually all that is needed to reverse this type of behavior. When you sit down with the employee, remind them of your company’s policy, and inform them that these days are not “freebies,” but are days to be used only in the event of an real emergency situation. Also, remind them of the many inconveniences of unexpected employee absences. Remember, your goal is not to make accusations but to make them aware of the fact that you notice the pattern that has developed. In general, advising them that you are, in fact, aware of the situation is usually enough to stop the habit.

Both types of absenteeism policies have their advantages and disadvantages. The excuse based system requires employees to provide proof that their sick day was needed, but, if employers do not cap the number of days available, some dishonest employees will take advantage of the opportunity to miss work excessively. A no fault system places far less responsibility on the employer, but there is still great opportunity for employees to take unnecessary days off. Therefore, the decision of which absenteeism policy to implement will require you to reflect on your business’s values and priorities. Whatever you decide, however, remember that proper implementation and attention to the details of your employees’ absence patterns can greatly impact the productivity of your workplace.