The Office Software (also abbreviated as theOS) is a computer program designed to help employers monitor employees’ internet usage in an attempt to increase productivity and put an end to the many potential dangers of internet misuse. The Office Software’s official website (TheOfficeSoftware.com) cites a number of statistics outlining the disadvantages of internet use at work, including increased risk for sexual harassment claims, cyberslacking, and employee espionage, but the makers of the software also acknowledge, like most employers, that internet has become an essential resource for the majority of companies across the globe. Therefore, theOS was designed with the stated goal of helping “managers and employees achieve increased productivity and enhanced security” without eliminating the internet’s infinite number of benefits. And theOS does just that. The software is comprised of three major components, each serving a separate and important function.

The first is referred to as the Covert Activity Monitor, a component which monitors computer use and stores information related to program usage, website searches, keystrokes, email, instant messaging, and file sharing, among other areas. This information can than be reviewed later by employers wishing to evaluate how employees have been utilizing the company’s internet connection. The Covert Activity Monitor component has the added bonus of allowing employers the ability to block or password-protect specific websites or categories of websites that they deem inappropriate for work. Individual websites can also be tagged as “time-wasters,” and theOS will then deliver the employer a review of how much time an employee has wasted on the designated time-waster website. 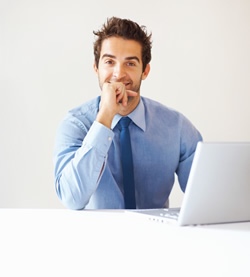 The third and final component of theOS is the Real-time Access Device. This allows employers to tap into employees’ computers to determine the activities in which the employees are engaging at that exact point in time. This feature can be used on employees whom employers suspect to be engaging in inappropriate internet usage, or it can be used to randomly check employees to determine how they spend their workdays.

These three components combine to create a software package that presents a number of benefits to employers. theOS is a multifaceted software that allows employers to monitor their employees’ productivity. Cyberslacking and other forms of internet misuse will almost certainly decline due to theOS’s unique ability to give employers insight into the computer usage habits of their employees.